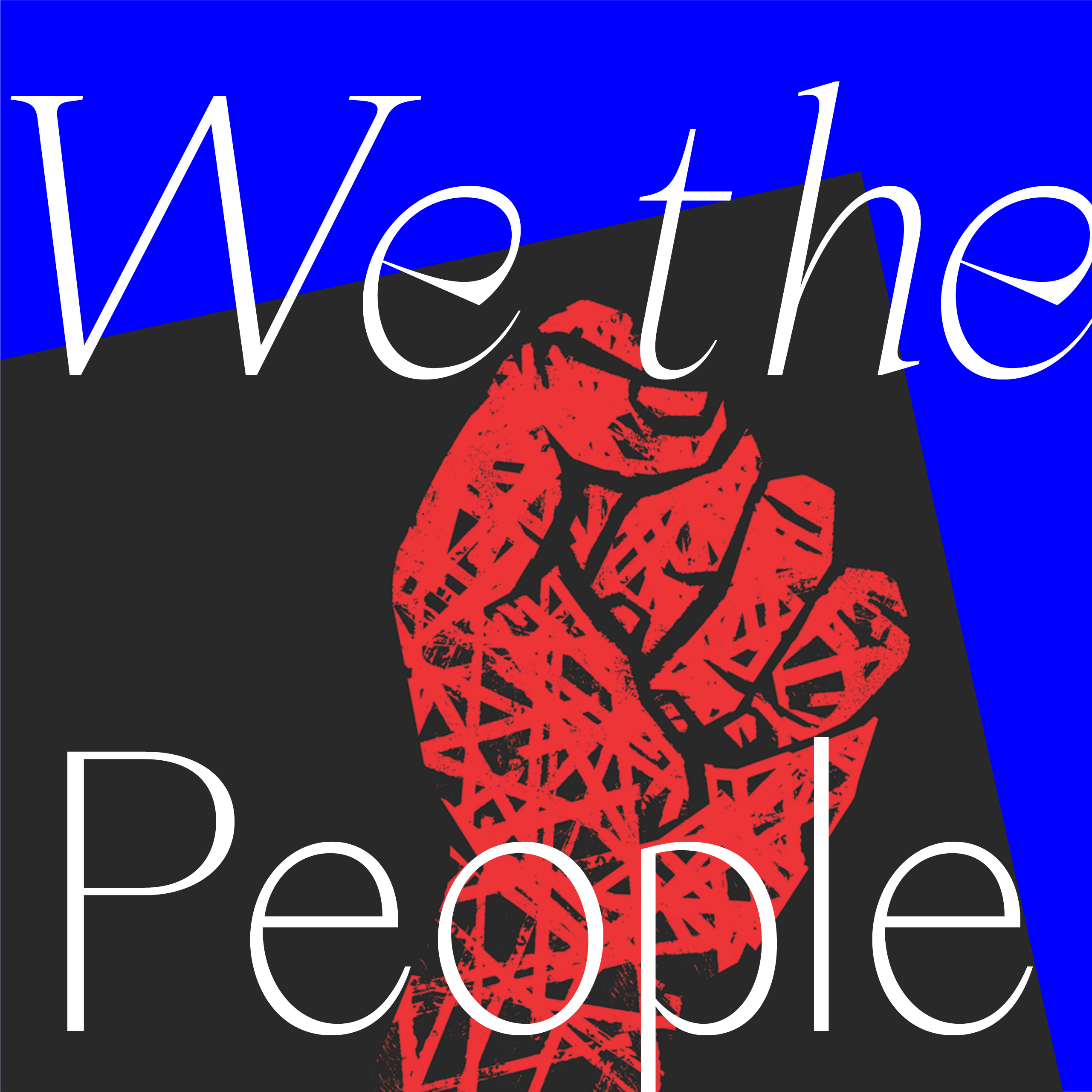 September 22, 2020
We The People by ThoughtMatter
Rating: G

Following the 2016 presidential election, ThoughtMatter—a strategic design studio—launched an ambitious creative project to engage Americans with their country’s founding document in a new way. They began by redesigning the document itself. ThoughtMatter raised over $20,000 on Kickstarter to produce and donate copies of the newly-redesigned Constitution to 70 schools in 55 cities. This redesign, however, was only the beginning.

In 2017, ThoughtMatter commissioned twelve prominent designers to create eleven posters featuring the Preamble and Bill of Rights. In collaboration with The Cooper Union, the team organized and hosted a We The People exhibition on National Constitution Day at The Cooper Union Gallery featuring the poster series. Each artist offered their interpretation of the document, challenging viewers to think critically about the first ten amendments. The event was a testament to the power posters have to communicate big ideas.

On the day of the event, attendees received a beautifully designed exhibition brochure with details on each amendment and the artists who took on the challenge of interpreting this 230-year-old document. The letter to all attendees was summed up by the great Albert Camus, who wrote, “Freedom is nothing else but a chance to be better.”

Three years later, we are proud to be sharing these posters on National Constitution Day, 2020. Each of these artist interpretations is an important reminder of the impact these words have on daily life, even our ability as an organization to do what we do. 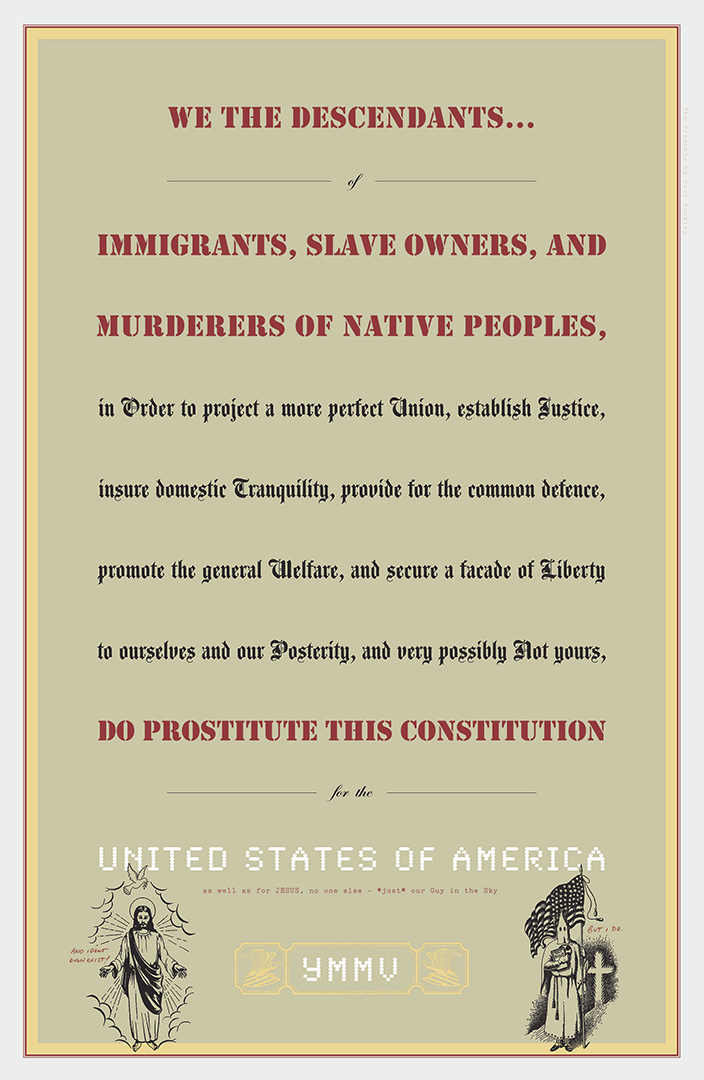 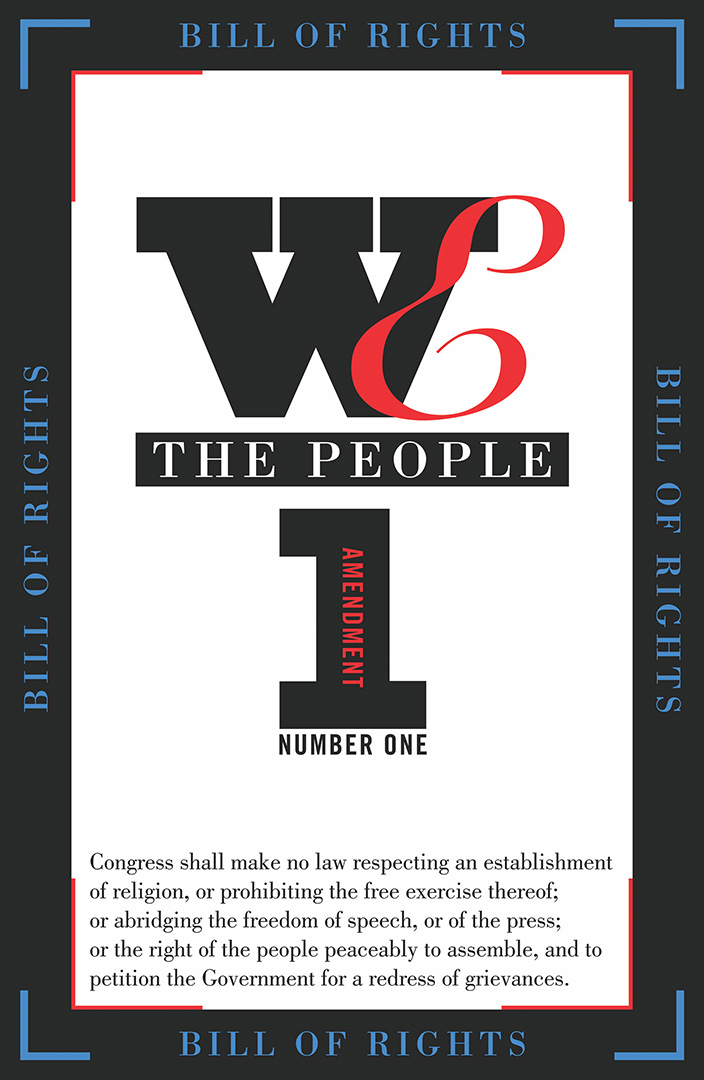 This First Amendment poster was designed by the beloved Milton Glaser, who inspired generations of creatives to exercise their freedom of speech through design.

Amendment I: Congress shall make no law respecting an establishment of religion, or prohibiting the free exercise thereof; or abridging the freedom of speech, or of the press; or the right of the people peaceably to assemble, and to petition the Government for a redress of grievances. 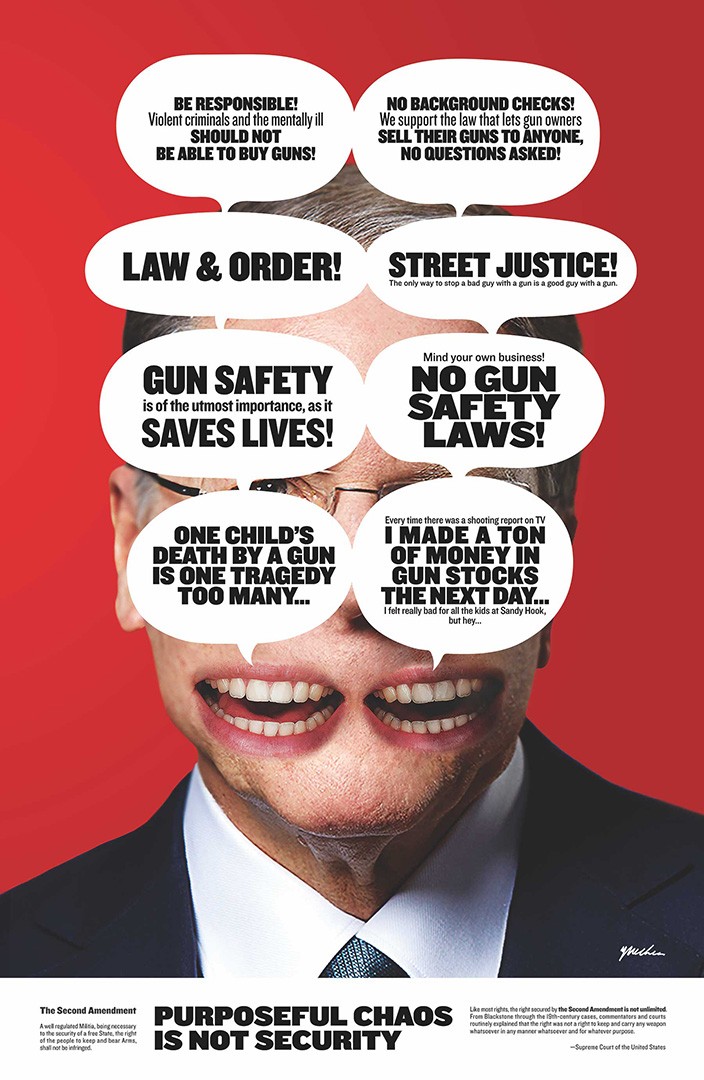 A striking interpretation of the Second Amendment by award-winning designer and Art Director at City University of New York, Yue Chen.

Amendment II: A well regulated Militia, being necessary to the security of a free State, the right of the people to keep and bear Arms, shall not be infringed. 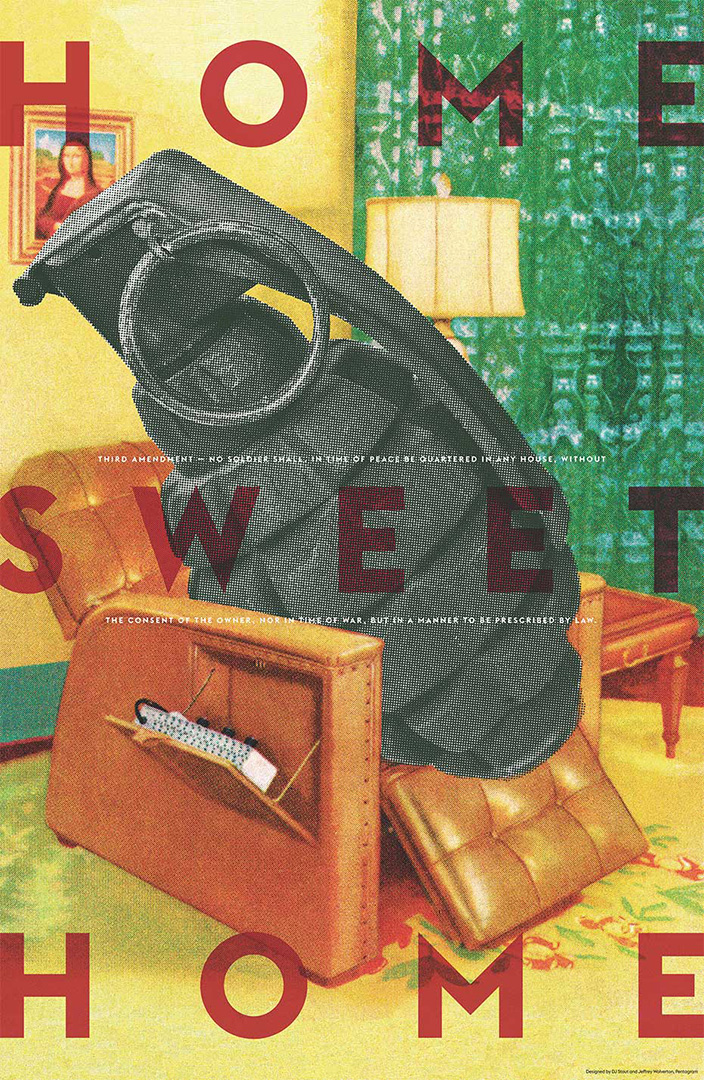 Not to fear, no need for another place setting. DJ Stout, Principle at acclaimed international design consultancy Pentagram, created this interpretation of a lesser-known constitutional amendment.

Amendment III: No Soldier shall, in time of peace be quartered in any house, without the consent of the Owner, nor in time of war, but in a manner to be prescribed by law. 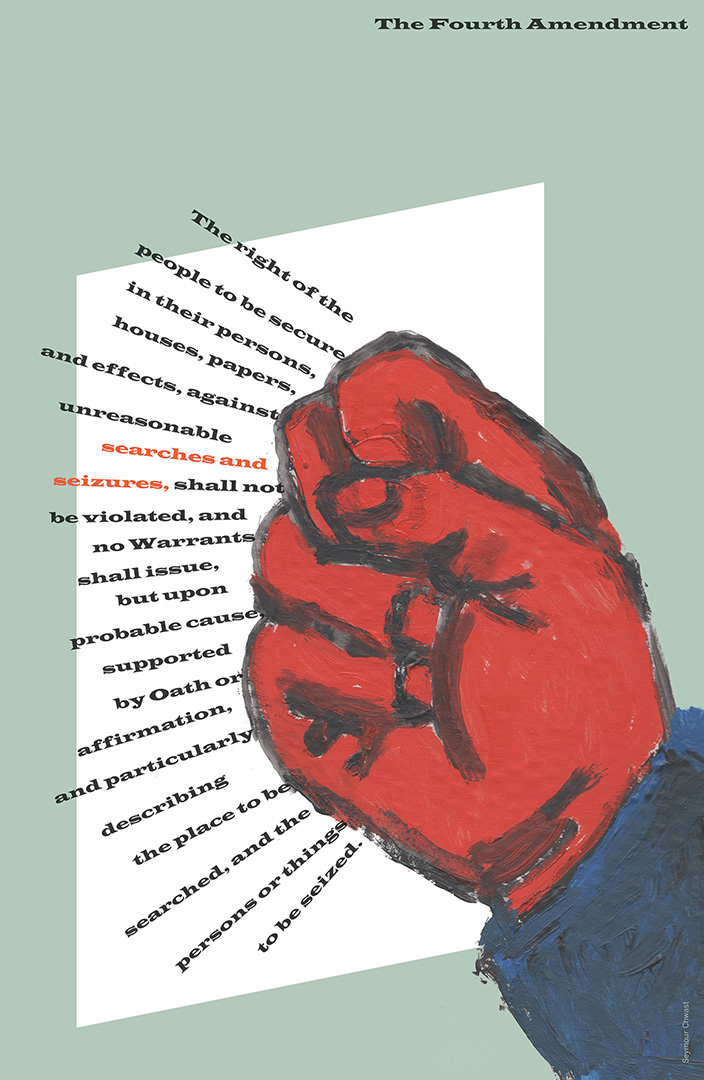 Designer, illustrator and founding partner of Push Pin Studios, Seymour Chwast, took on the Fourth Amendment in this 2017 Bill of Rights series.

Amendment IV: The right of the people to be secure in their persons, houses, papers, and effects, against unreasonable searches and seizures, shall not be violated, and no Warrants shall issue, but upon probable cause, supported by Oath or affirmation, and particularly describing the place to be searched, and the persons or things to be seized. 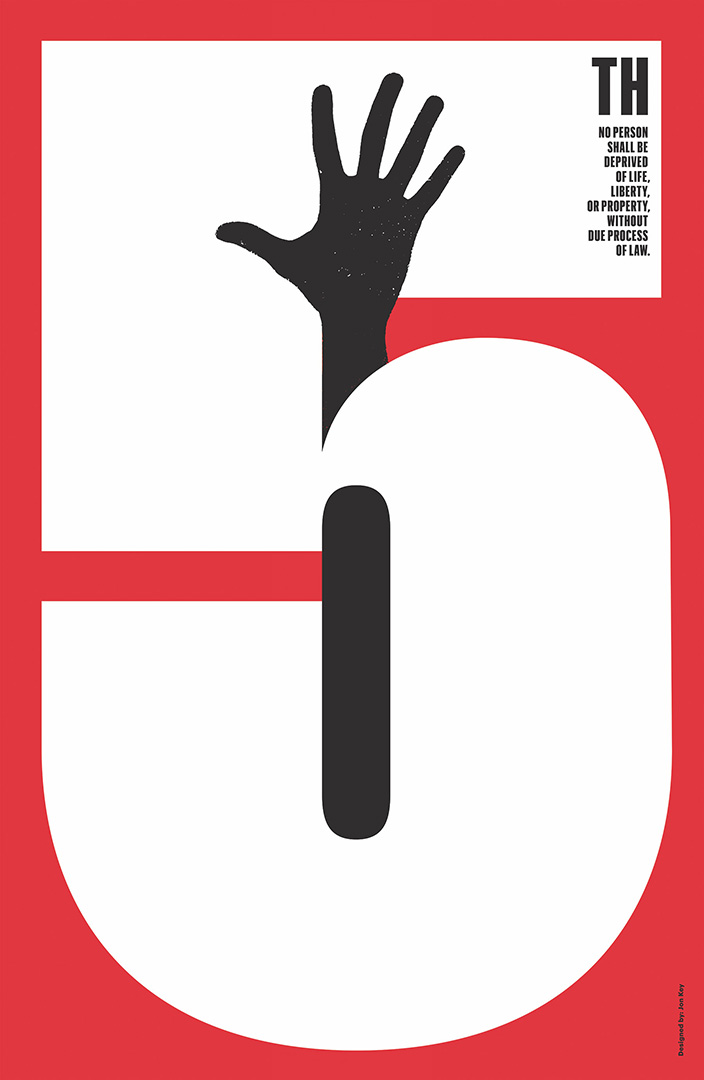 We all know this one from the movies. Artist, designer and writer Jonathan Key created this straightforward yet powerful interpretation of the Fifth Amendment.

Amendment V: No person shall be held to answer for a capital, or otherwise infamous crime, unless on a presentment or indictment of a Grand Jury, except in cases arising in the land or naval forces, or in the Militia, when in actual service in time of War or public danger; nor shall any person be subject for the same offence to be twice put in jeopardy of life or limb; nor shall be compelled in any criminal case to be a witness against himself, nor be deprived of life, liberty, or property, without due process of law; nor shall private property be taken for public use, without just compensation. 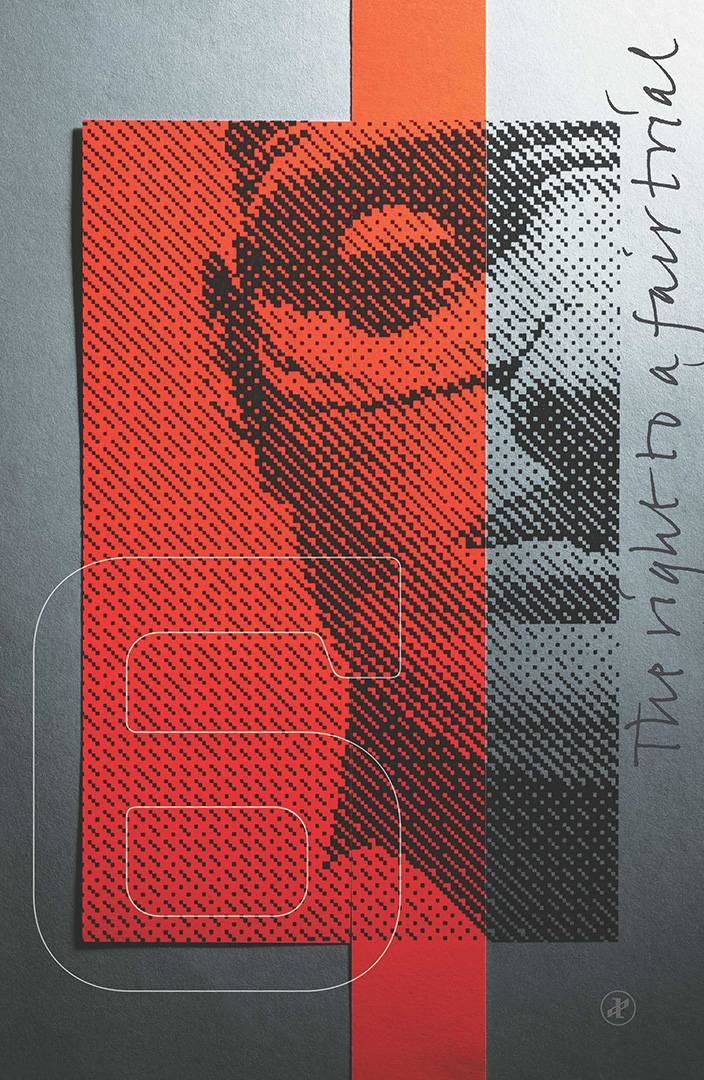 This neatly framed interpretation of the right to a fair trial is the work of the incredible Mark Fox & Angie Wang. Fox and Wang’s posters are included in collections in galleries across Europe and North America.

Amendment VI: In all criminal prosecutions, the accused shall enjoy the right to a speedy and public trial, by an impartial jury of the State and district wherein the crime shall have been committed, which district shall have been previously ascertained by law, and to be informed of the nature and cause of the accusation; to be confronted with the witnesses against him; to have compulsory process for obtaining witnesses in his favor, and to have the Assistance of Counsel for his defence. 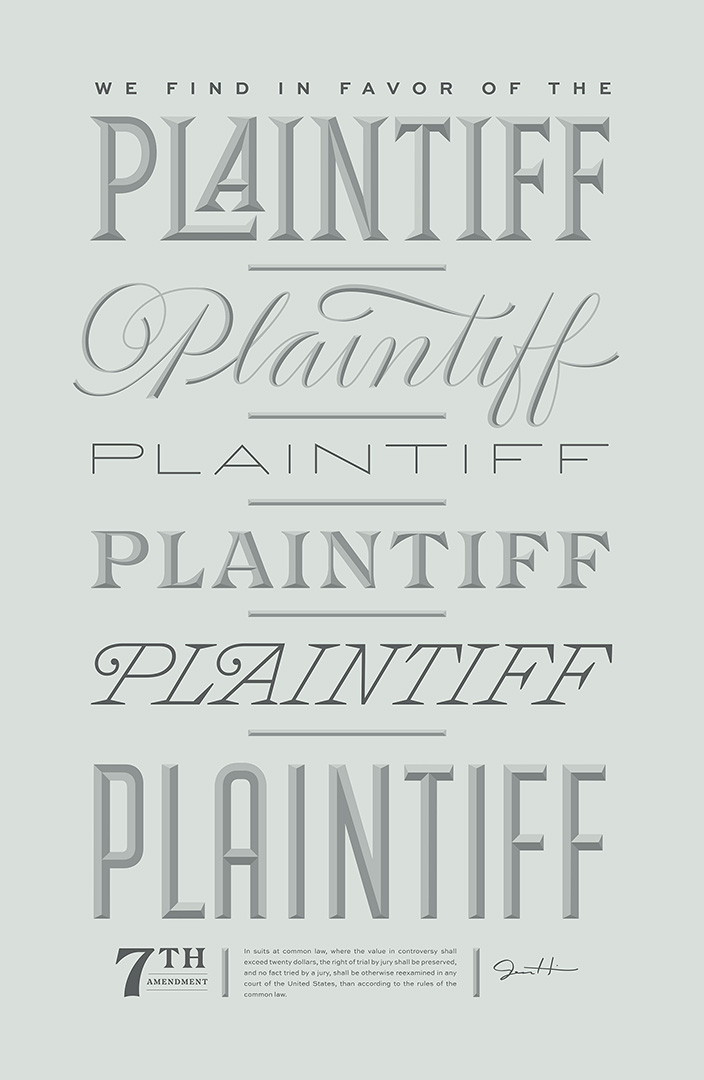 We’re in love with these typefaces. Beautiful work by lettering artist Jessica Hische as her interpretation of the Seventh Amendment.

Amendment VII: In Suits at common law, where the value in controversy shall exceed twenty dollars, the right of trial by jury shall be preserved, and no fact tried by a jury, shall be otherwise re-examined in any Court of the United States, than according to the rules of the common law. 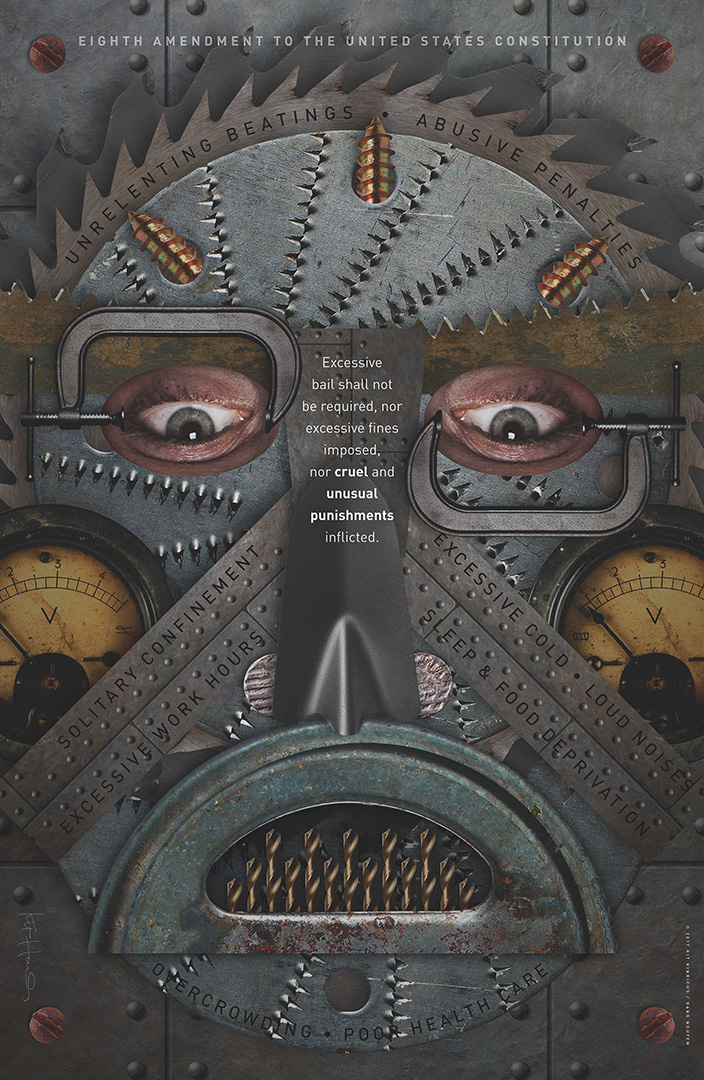 A spine-chilling piece from the acclaimed director, lecturer, and founder of Studio Hinrichs, Kit Hinrichs—illustrating our protections against ‘cruel and unusual punishments’ in the Eighth Amendment.

Amendment VIII: Excessive bail shall not be required, nor excessive fines imposed, nor cruel and unusual punishments inflicted. 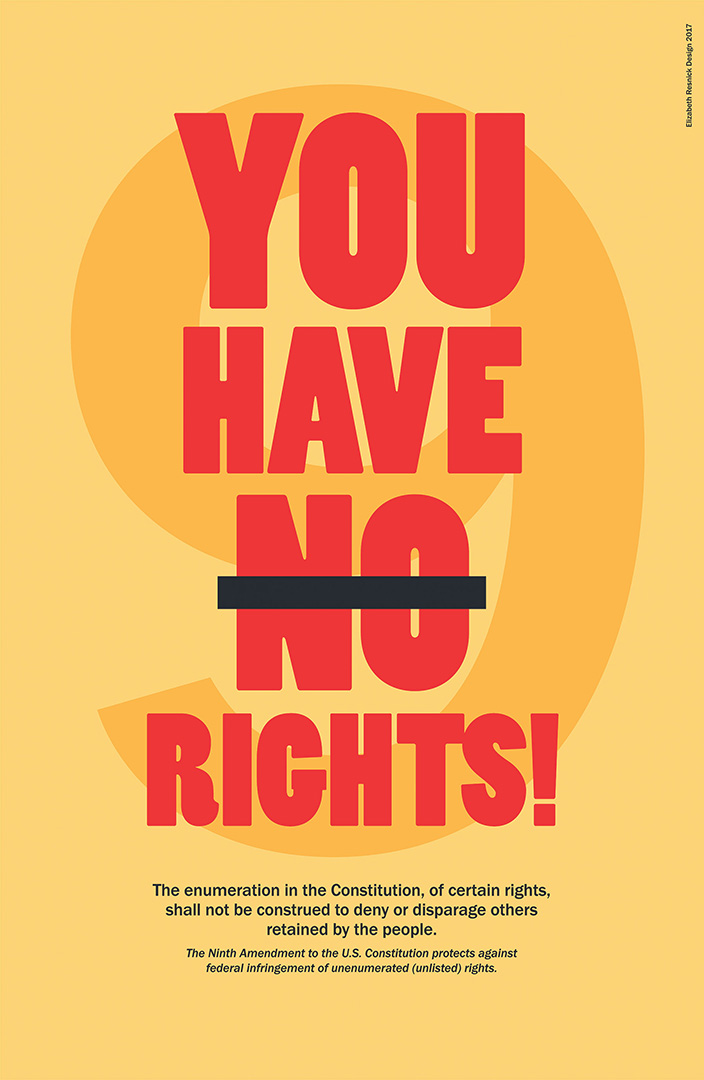 Know your rights! This beautiful poster by Professor Emerita Elizabeth Resnick does the important work of making us stop and think.

Amendment IX: The enumeration in the Constitution, of certain rights, shall not be construed to deny or disparage others retained by the people. 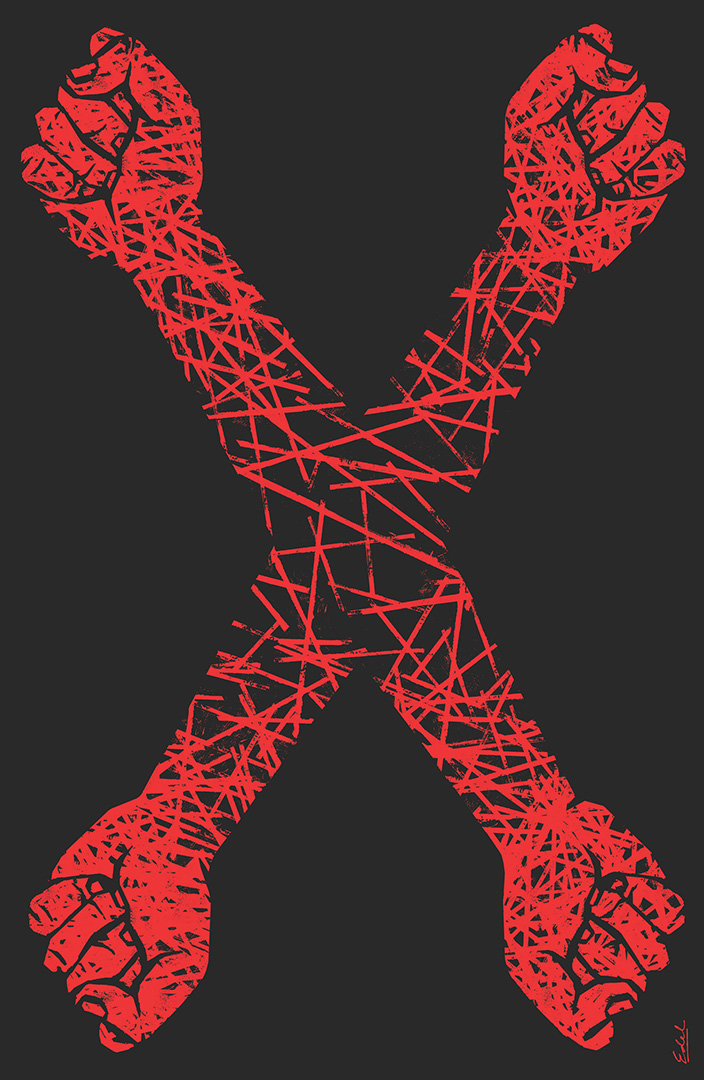 Amendment X: The powers not delegated to the United States by the Constitution, nor prohibited by it to the States, are reserved to the States respectively, or to the people.

Given what Americans have experienced in the last several months—leading up to arguably the most consequential election in our lifetime—conversations like these couldn’t be more critical. For ThoughtMatter, the vital work of engaging people with the Constitution continues.

This year, the team has also embarked on an ambitious docuseries featuring diverse, creative interpretations of the U.S. Constitution from Americans of all backgrounds. You can watch the latest For the People episodes here. 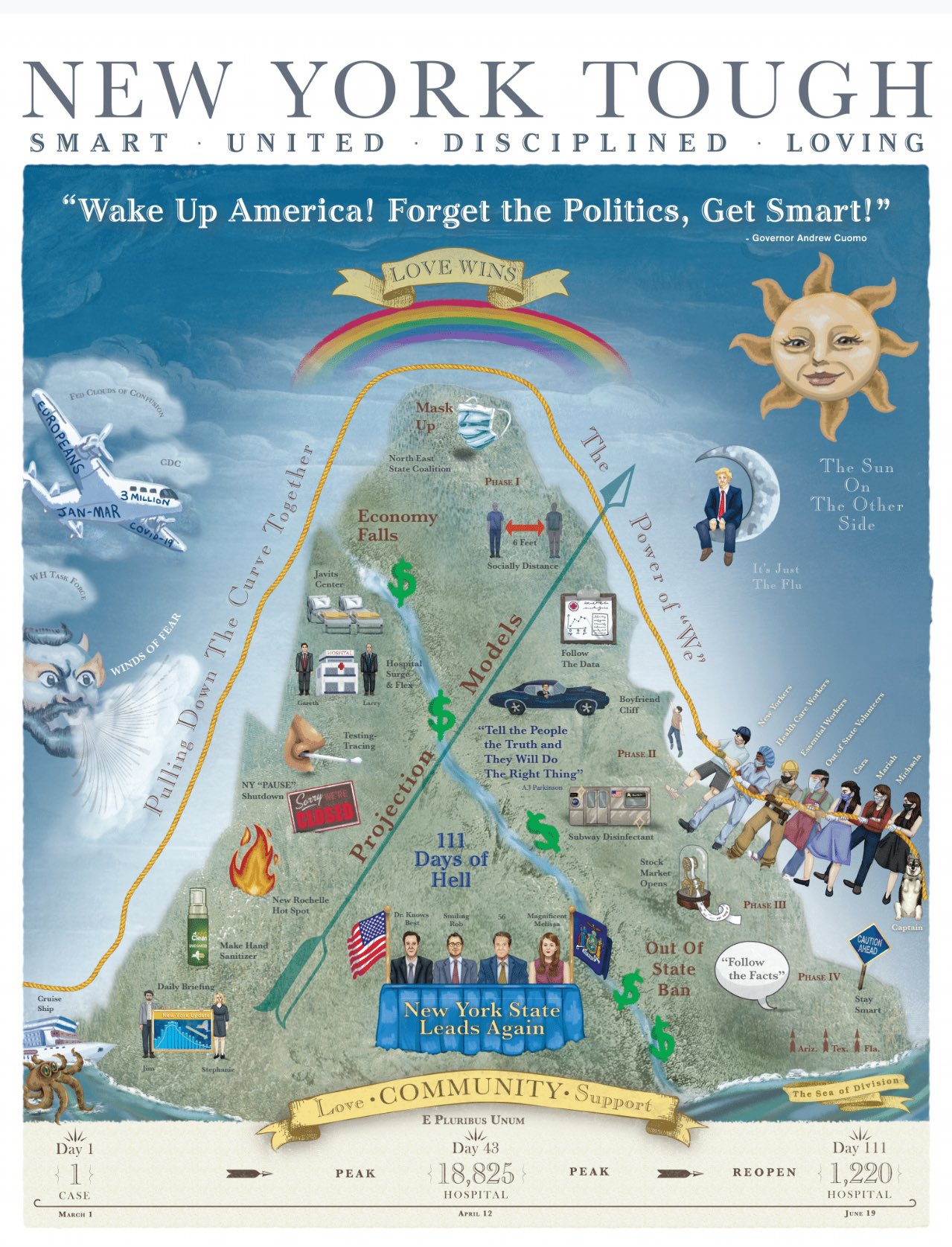 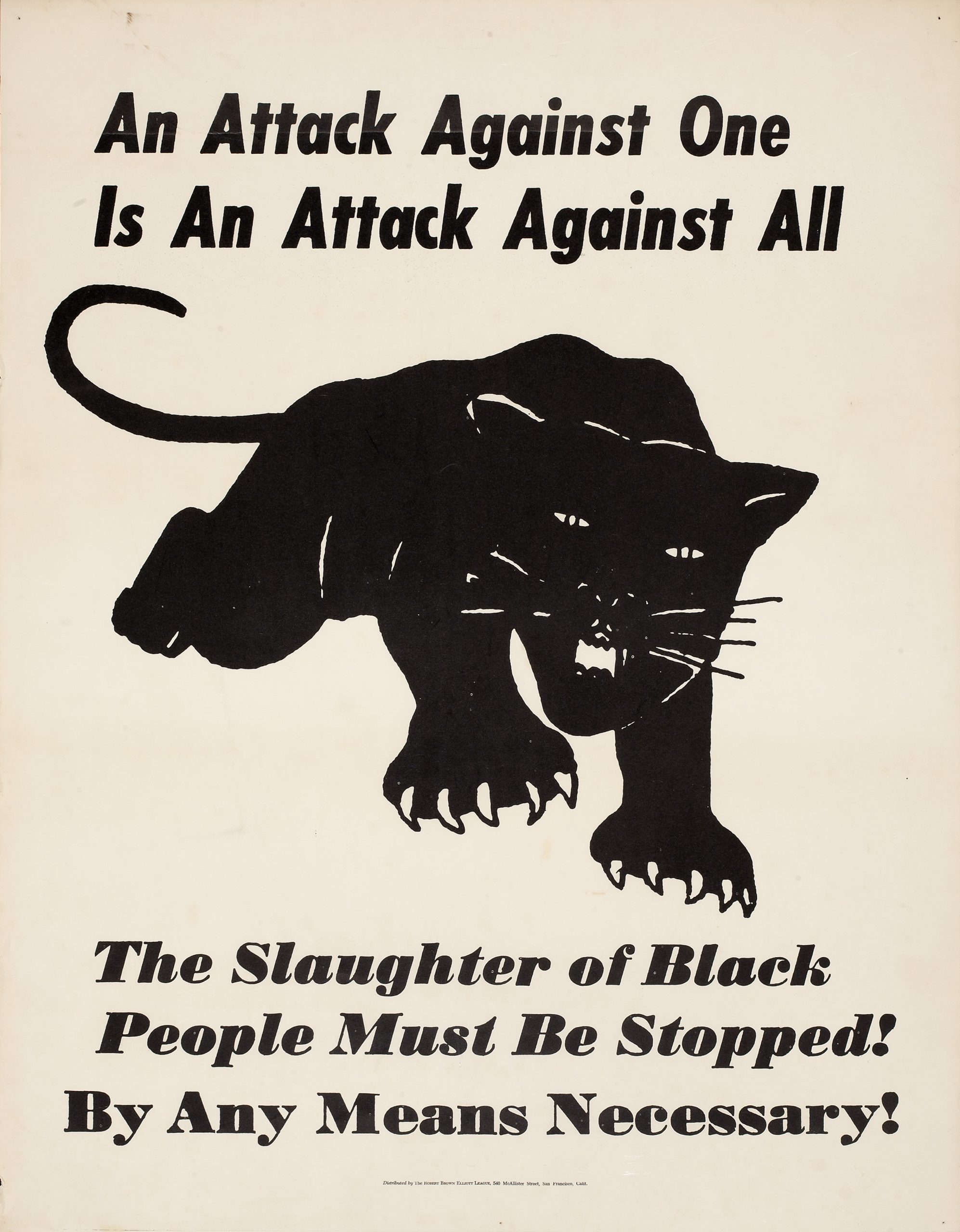 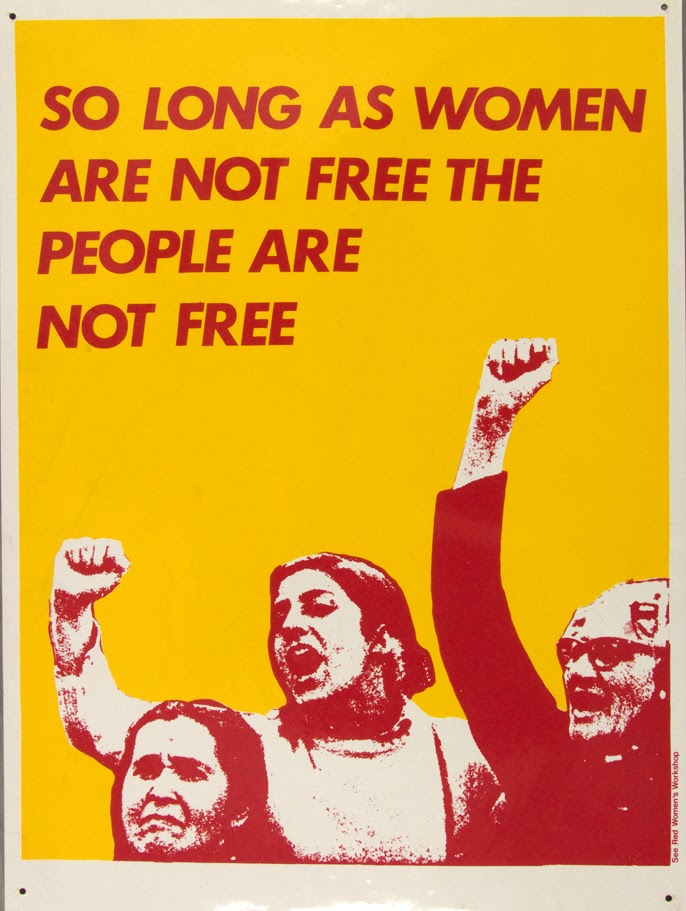