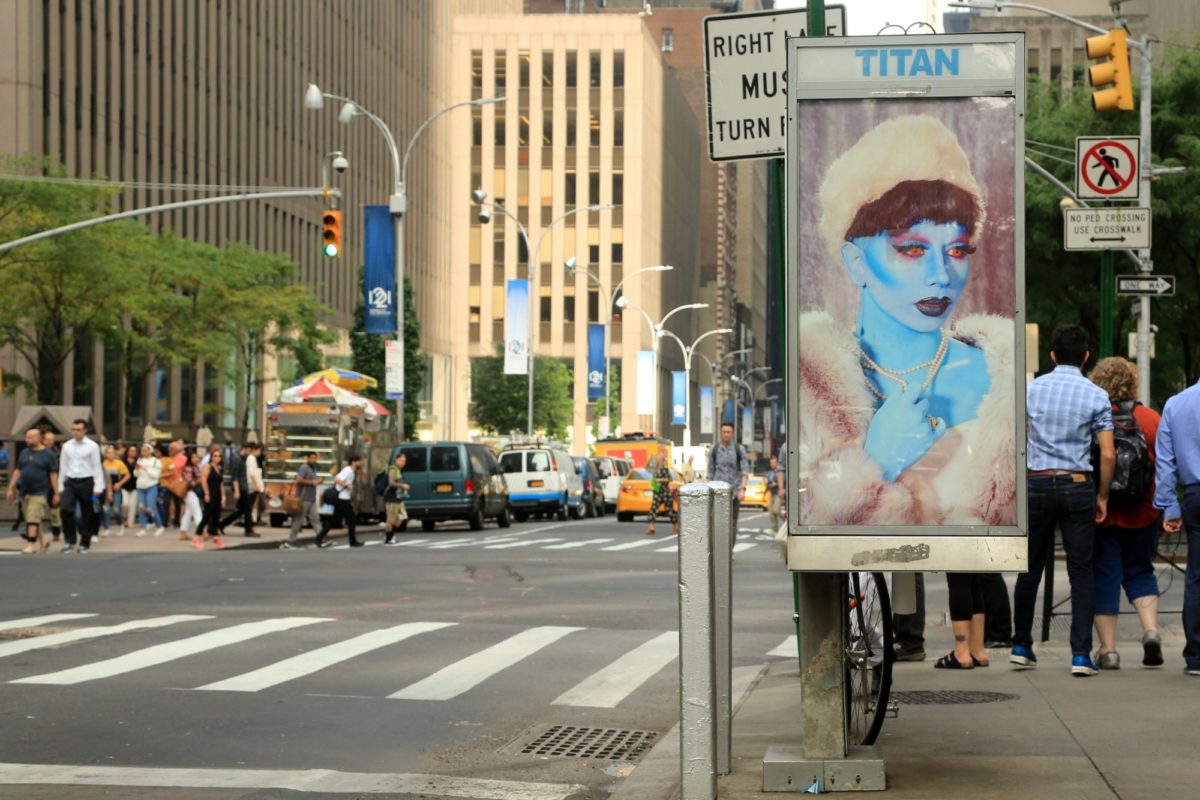 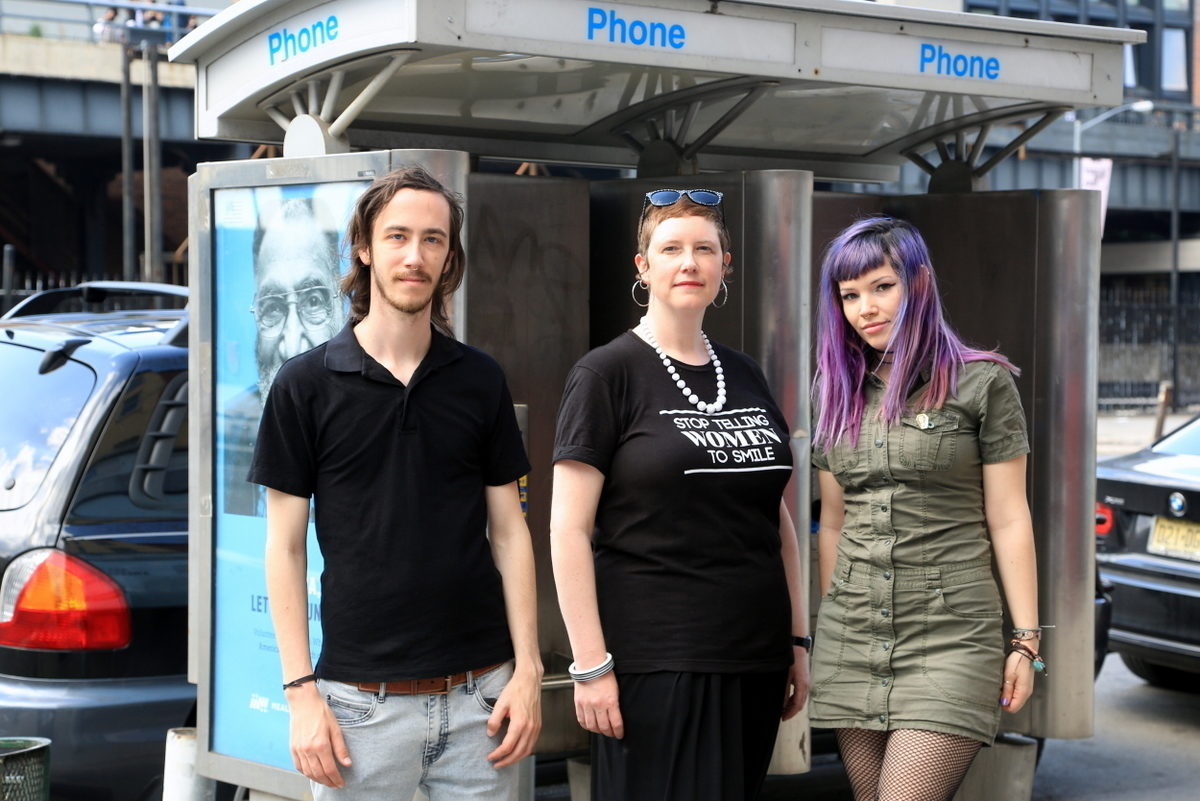 The minds behind the project: RJ Rushmore, Luna Park, and Caroline Caldwell (photo by Jordan Seiler).

Interview responses are a collaboration among Rushmore, Park, and Caldwell. Photos of artwork are by Luna Park.

Starting in January of 2017, Art in Ad Places partnered with 55 artists to illegally take over one outdoor advertising space per week for a little over a full year. Having successfully completed that project, Poster House talks with its three organizers about their incredible process and what’s coming next.

Poster House: I’m really impressed and thrilled that you guys made it through an entire year of Art in Ad Places, taking over one corporate ad space per week and replacing it with actual art. How did you go about choosing the artists you wanted to participate in the project? Did anyone say no?

Art in Ad Places: We brainstormed a list of maybe 150 artists – no matter how unrealistic or whether we had any way to contact them – and then cut that list down so that it wasn’t too weighted towards men, streets artists, or folks with no connection to NYC … and started emailing people. Plenty of people didn’t get back to us, and I can think of two who said no, but what was more surprising was hearing back from someone with whom we had no connection, like the Guerrilla Girls, and they were an enthusiastic yes. When we started putting up posters in January 2017, we had about 80% of the line-up confirmed, and we added the rest as the year went on. 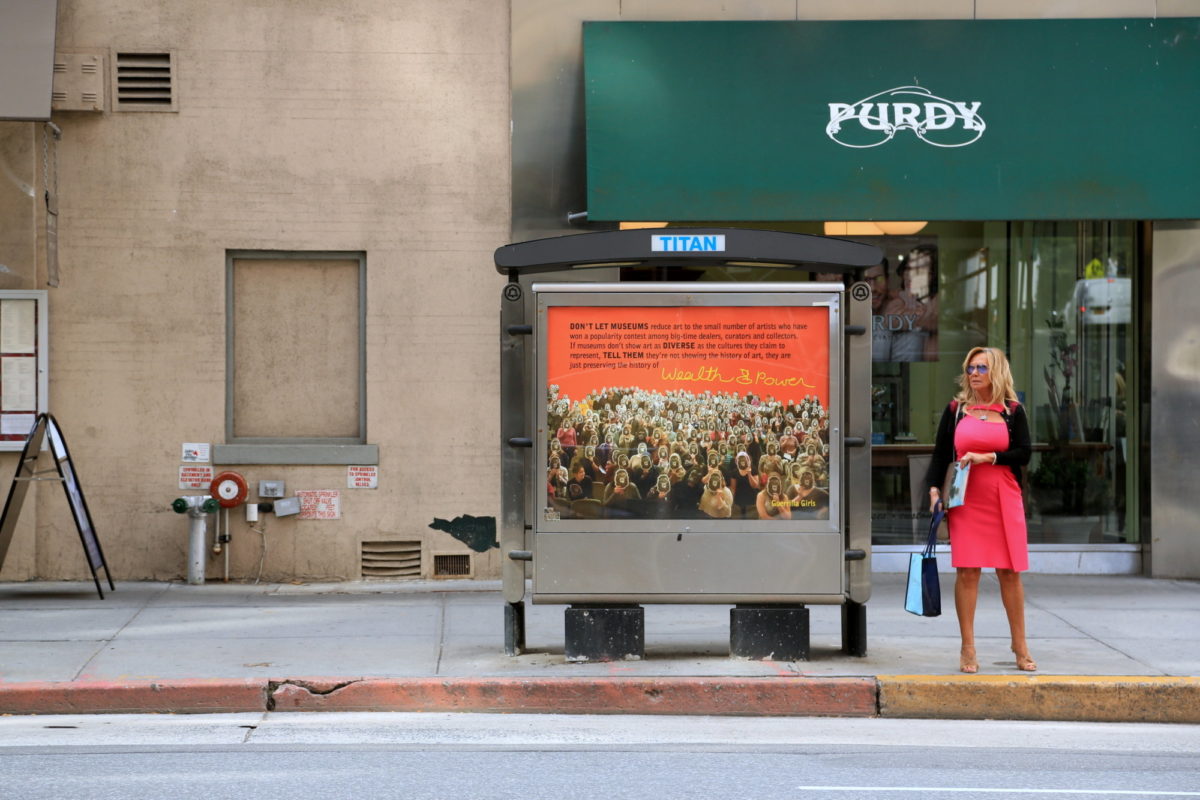 Artwork by the Guerrilla Girls. Photo by Luna Park.

PH: The project covered so much of NYC. Was there a methodology to how you chose the phone kiosks and other ad spaces that you used? What was the scoping out process like?

AiAP: We wanted to hit every borough, and as many neighborhoods as possible. For one thing, it made us less predictable and maybe contributed to the posters lasting longer. But also, everyone deserves a respite from advertising, not just the hipsters near where we live or work. Sometimes, the placement was pretty random. But in many cases, we put more thought into what location would best fit the poster. Martha Cooper’s poster, for example, was installed about 2 blocks form where she originally took that photo, almost 40 years ago. 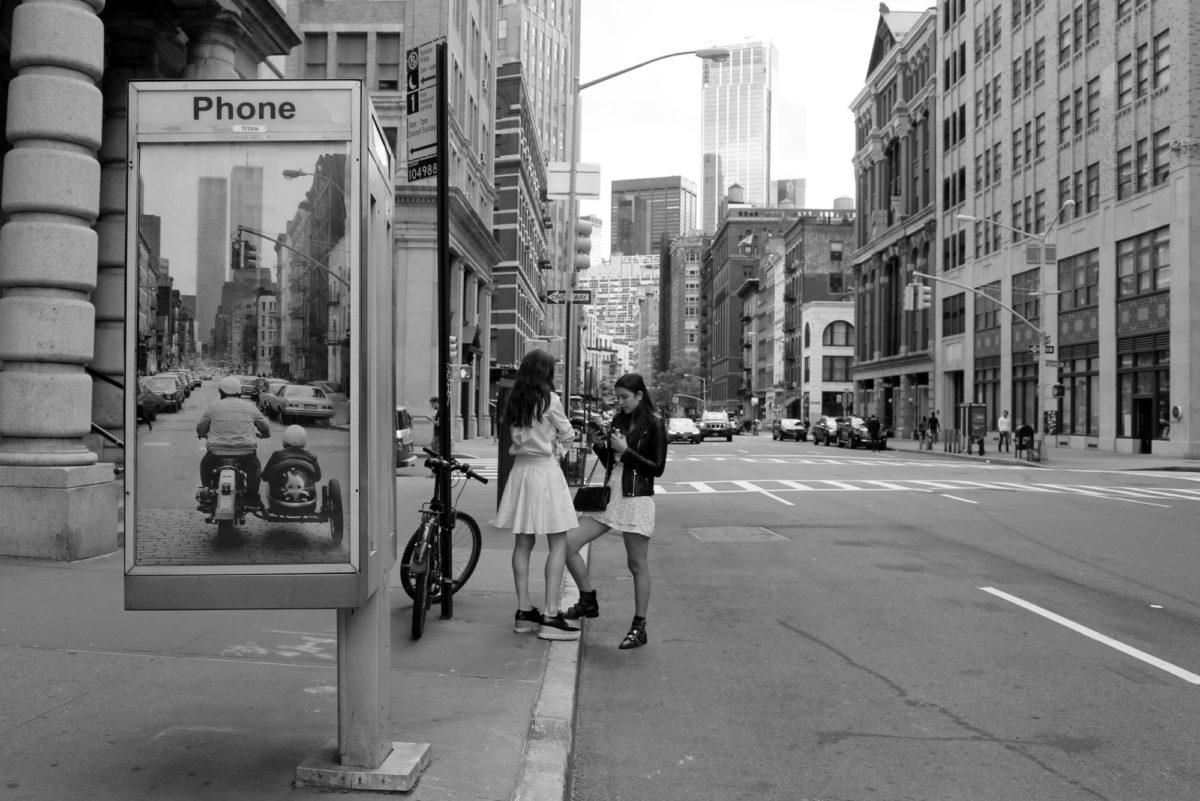 PH: Did you find that some sites were more or less popular than others? What’s the longest an art intervention was able to stay in a single location before being taken down by authorities?

AiAP: We haven’t checked in on it in a little while, but there’s one piece that might still be running, and it’s been up since August! Usually though, the posters seemed to last a week or two. However, most people who followed the project weren’t seeing the work in person. They were seeing it online. One exception was Heather Benjamin’s poster, which was on 14th Street near Union Square. A lot of people reached out to say that they’d come across it, even letting us know when it was finally taken down. 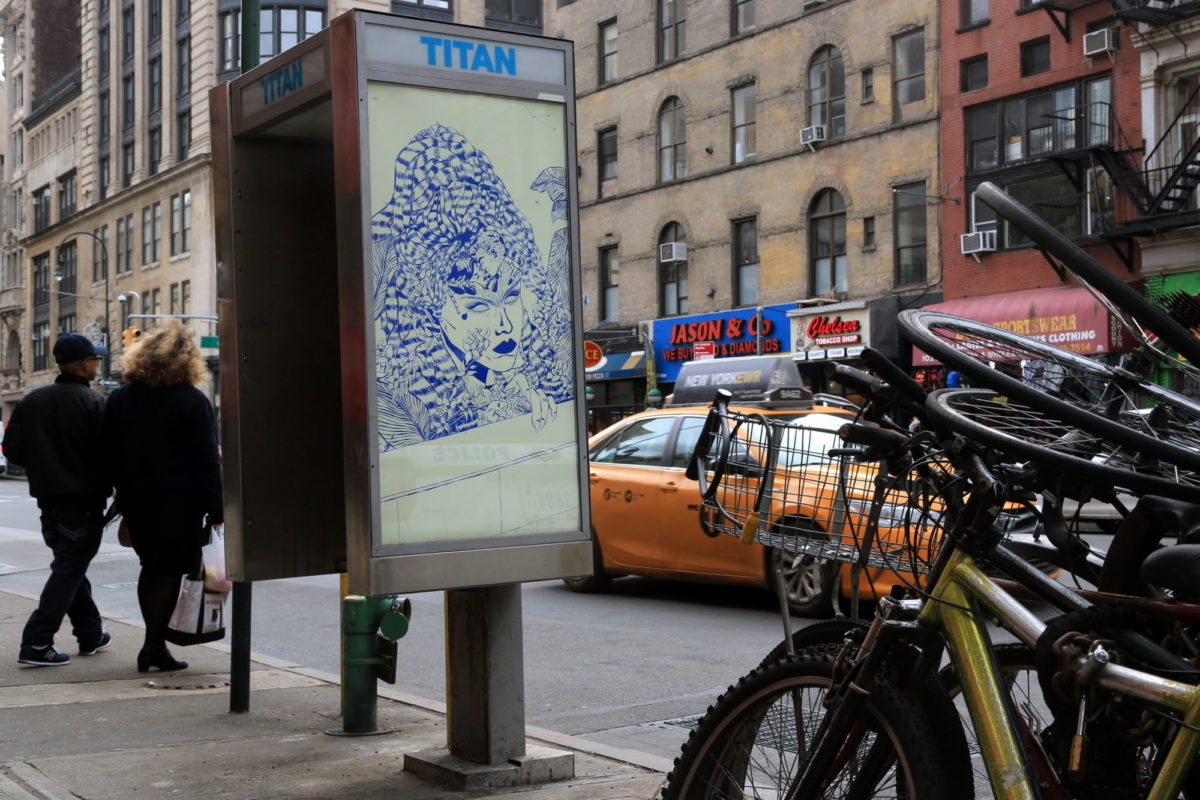 PH: There are many artists and groups which do similar activities under the anti-advertising umbrella, but because the basis of such interventions are illegal, and therefore pretty secretive, there’s also a lot of public confusion about the nature of such projects. For example, I’m sure some people think you’ve actually paid for the ad spaces much like MoMA did in their series of billboard takeovers in the late 1990s. Have you had similar frustrations trying to explain the nature of Art in Ad Places? And, if so, what specific things do you think need the most clarification?

AiAP: From day one, people have been getting that confused. Many people, especially those who work in advertising or for the government, believed that we actually paid for the spaces we used! We didn’t. We were vague about that on our website. Our thinking was that we didn’t need to explain ourselves, as if we were guilty of something. While it’s implied, we never made the declaration “We don’t pay for this space because we believe we are well within our rights to interact with it. It’s space that’s been stolen from us.” To quote Banksy, “Any advert in a public space that gives you no choice whether you see it or not is yours… They have re-arranged the world to put themselves in front of you. They never asked for your permission, don’t even start asking for theirs.” 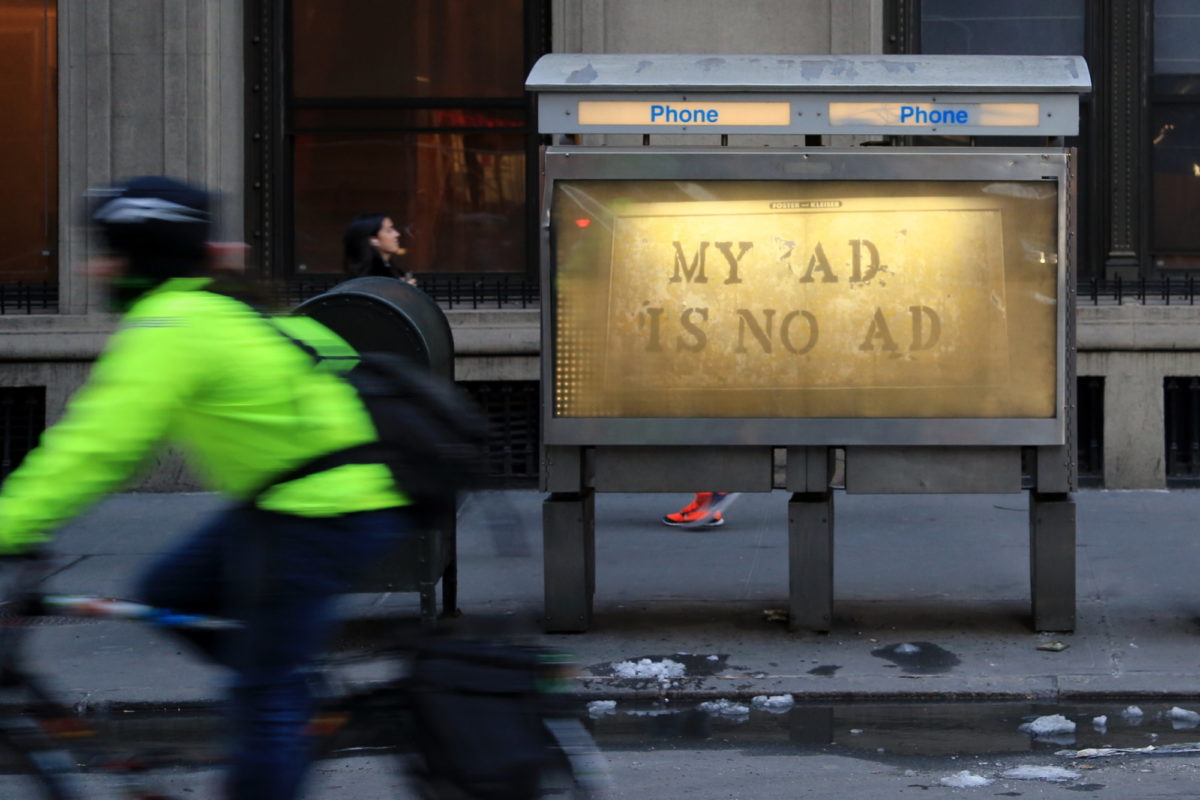 PH: What are some other really weird and off-base assumptions people have had of Art in Ad Places?

AiAP: A lot of people assume installing ad takeovers requires sneaking around at night. But installing at night looks suspicious. We wanted to look legit, so we wore high-vis vests, installed in broad daylight, and never had any problems. 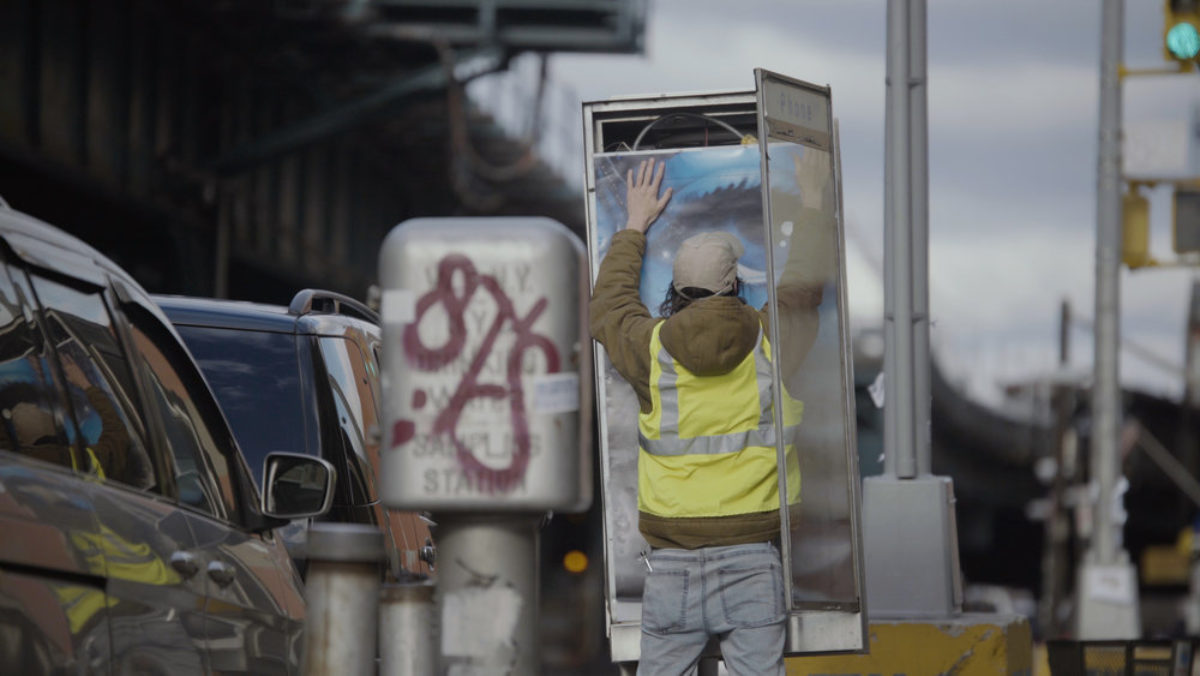 PH: Are there other similar anti-advertising projects going on around the world that you draw inspiration from? What made Art in Ad Places stand out?

AiAP: Absolutely. We had friends and advisors in Brandalism and Special Patrol Group, out of the UK, and Public Ad Campaign here in NYC. And people like Ron English and John Fekner, who were doing ad takeovers before we were even born, they laid the groundwork for what’s going on now. Ad takeovers are just about the last bastion of subversive public art, and artists and organizers around the world have taken notice. Joe Boruchow, OX, PosterBoy, Vermibus, Icy + Sot … So many individual artists and collectives inspired us, but they also challenged us to take a different approach. Rather than putting up 50 ad takeovers in one day, we wanted a slow burn, rolling out the work week by week to build and maintain an audience. How many times do you need to see an idea (or an ad) before it takes hold? See it once in the paper, like those massive one-day takeovers, and it fades from your mind. Follow an Instagram account that posts an item every week for a year and it sticks with you. At least that was our hope, one thing that we tried to do differently. Plus, we worked with a huge range of artists, from young artists to internationally-renowned names, from political activists to fantastic illustrators. 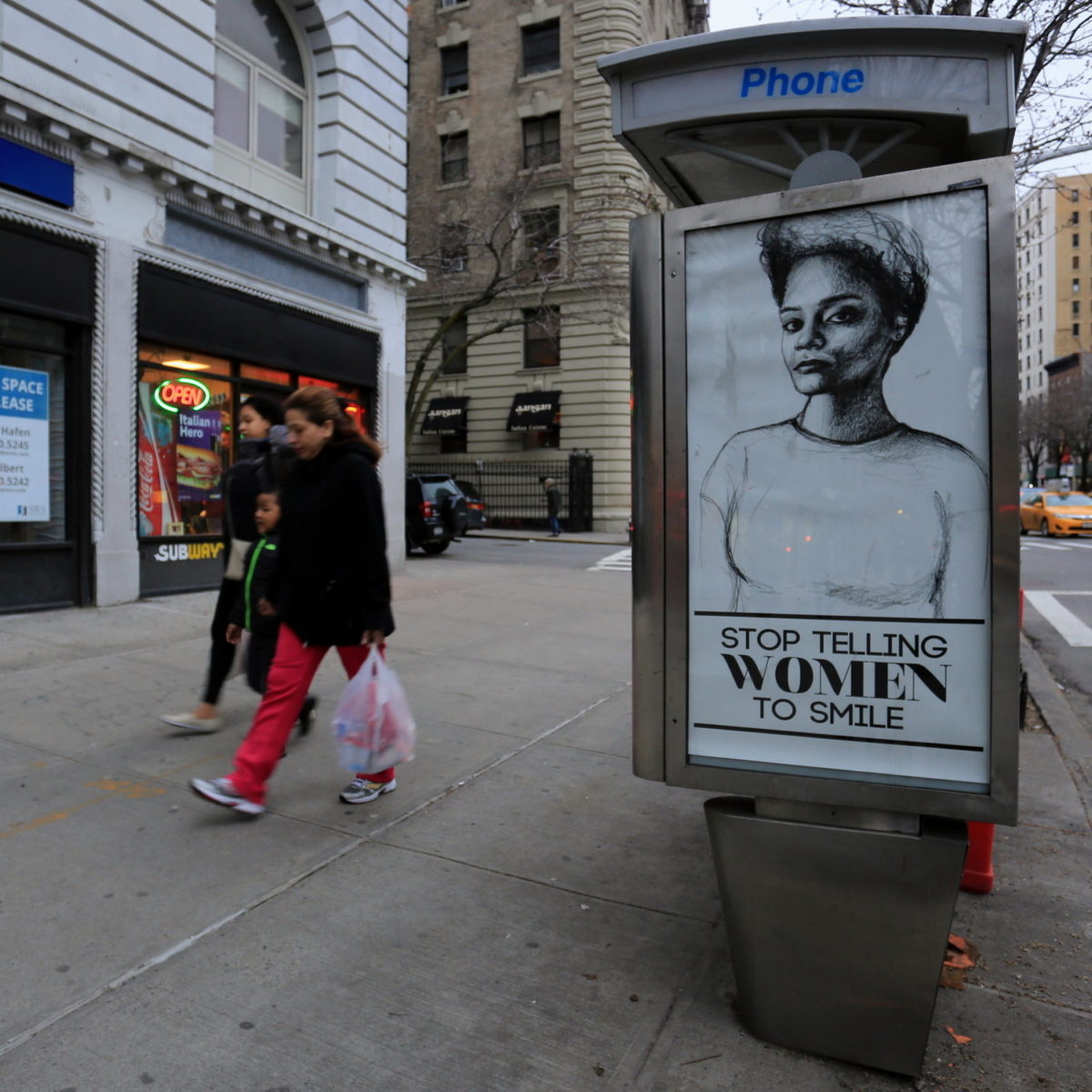 PH: Now that you’ve finished the yearlong cycle of art interventions, held an opening and closing party for the photography of each poster, and even produced a book featuring the art, where do you see Art in Ad Places going in 2018?

AiAP: We’re going to rest for a minute. We’re not done, but we’re not installing new work every week either. We’re speaking with one artist about putting up a series of their work soon, but we’d also love to expand beyond art. What about asking scientists, poets, and neighborhood residents what they’d put up? Realistically, with fewer and fewer payphones, we also either need to move to bus shelters or find ways to play with the digital ad displays that are popping up all over the city.

For more information on Art in Ad Places, and to see a complete gallery of all the posters created during the project, please visit their website. 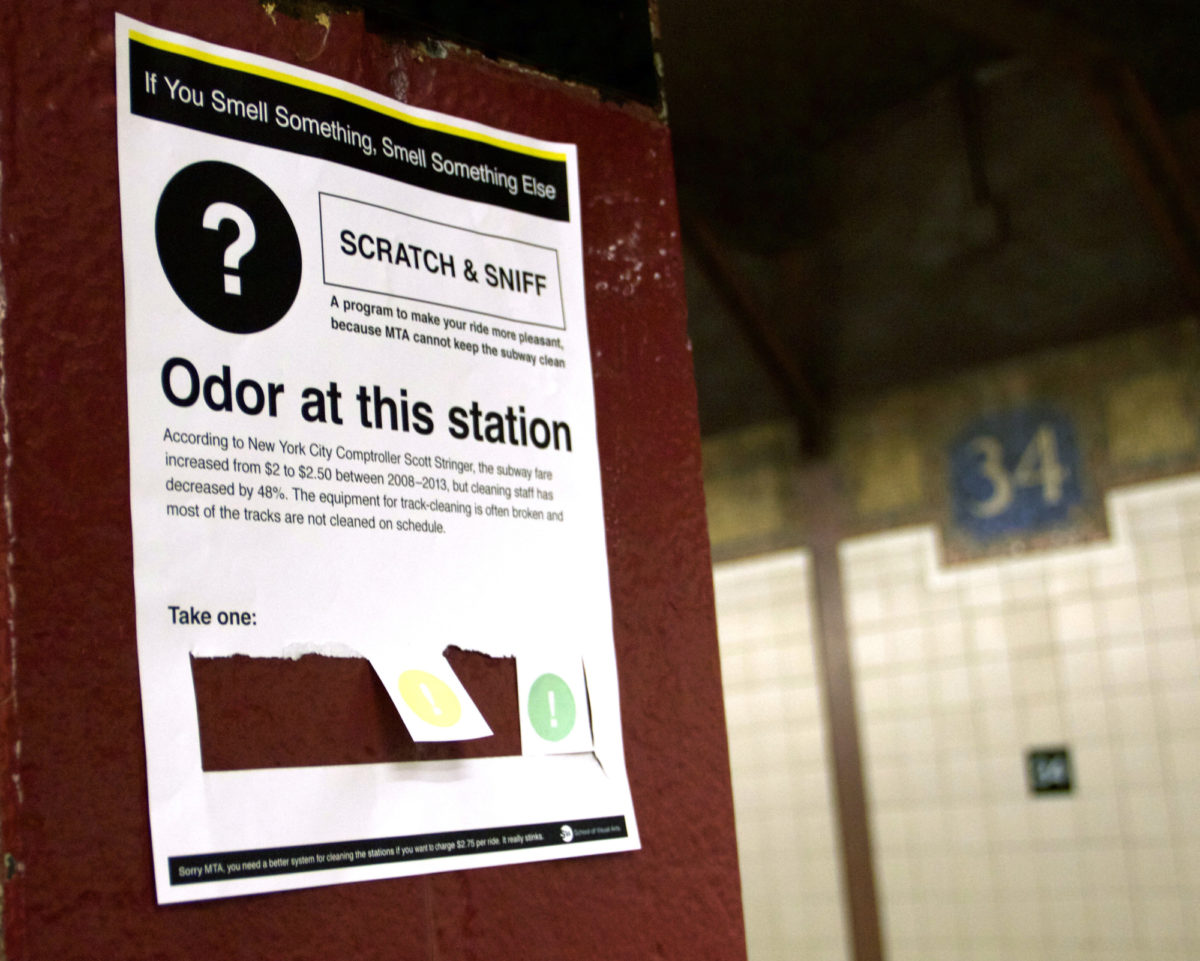 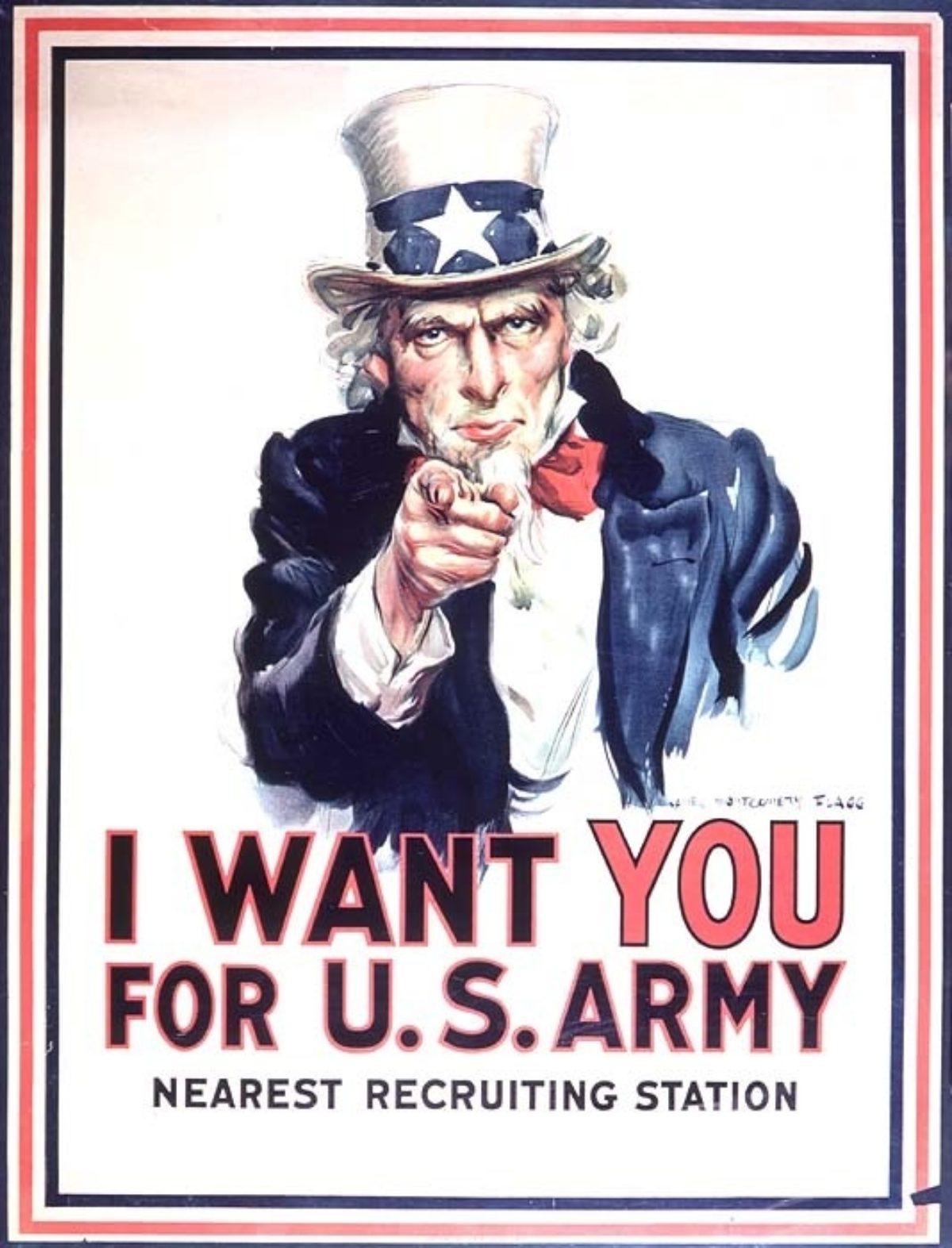 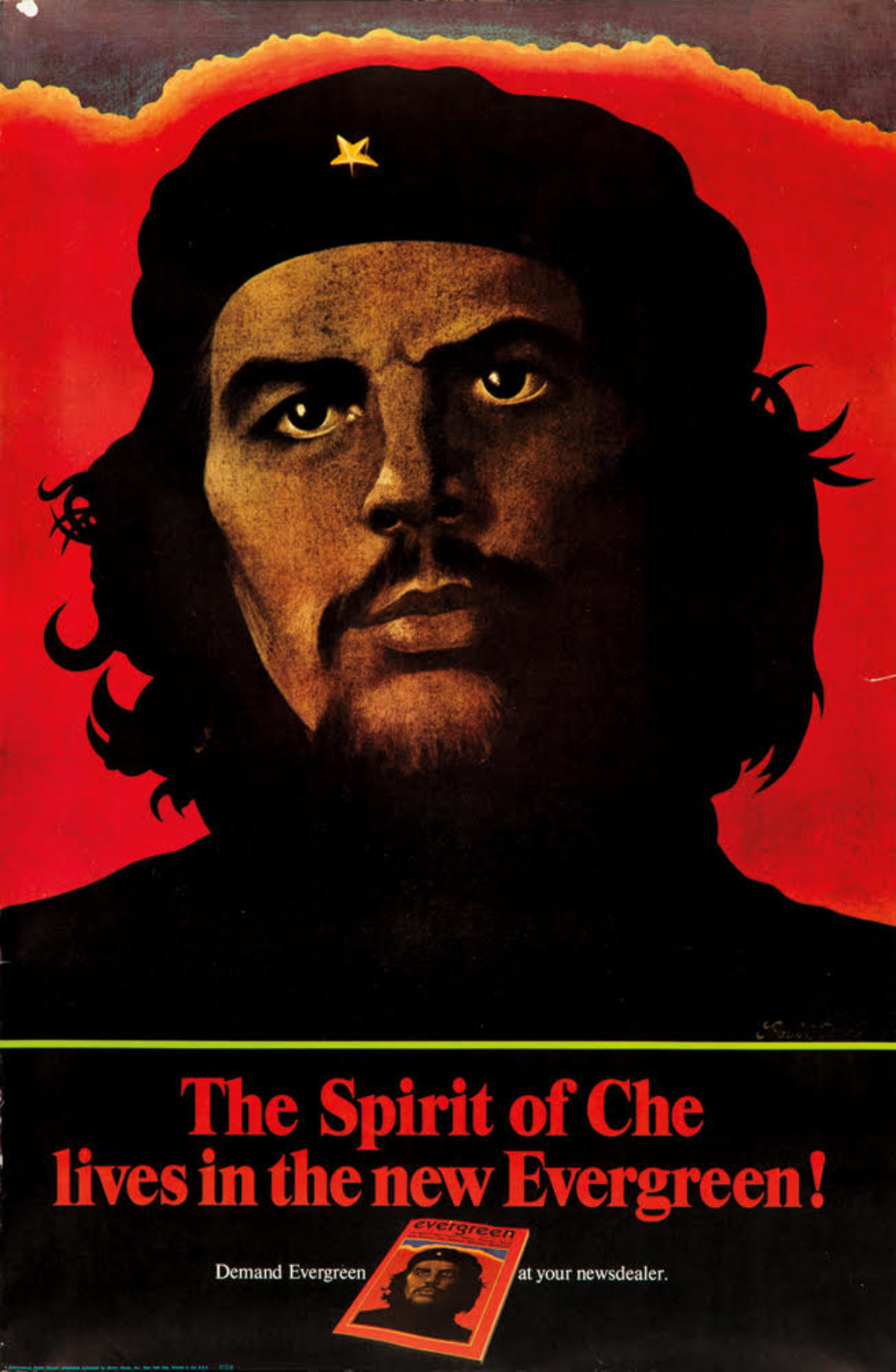