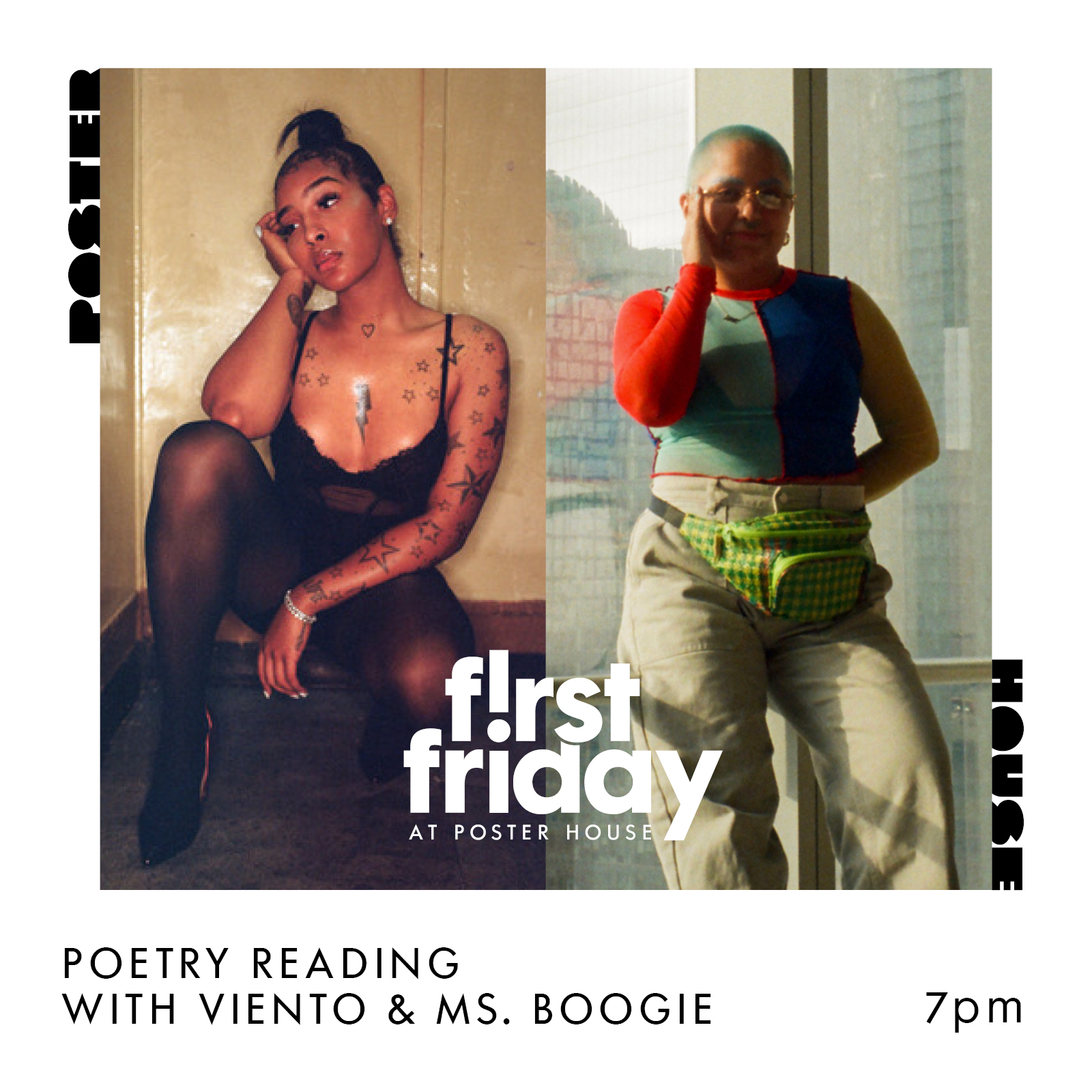 Poster House is pleased to welcome viento and Ms. Boogie for an evening of poetry. These talented, multi-hyphenate artists are sure to impress guests with their moving and insightful approach to verse. Ms.Boogie is an Afro-Latina Brooklyn-based MC and activist. Sex appeal, independence, and the power of femininity are at the top of her agenda as an artist—all topics readily discussed in the exhibition Ethel Reed: I Am My Own Property. Meanwhile, viento izquierdo ugaz is a multidisciplinary artist who considers the effect of migration on the visual language of their lineage, topics close to the many displaced artists featured in The Utopian Avant-Garde: Soviet Film Posters of the 1920s.

Ms.Boogie is a Afro-Latina Brooklyn based MC and activist. Sex appeal, independence and the power of femininity are at the top of her agenda as an artist. She stands tall at the intersections of underground and Mainstream Media as a Black Trans Woman in the genre of Hip Hop. She has dedicated her artistry to building a bridge between the avant-garde and conventional gaze of Rap & Hip Hop. Her music is rooted in amplifying the narratives of Black Trans Woman, a narrative which is often erased in Black Pop Culture. With Records like ‘Fem Queen’ and ‘Dickscipline’ she manages to not only represent her existence but also heal Black Trans Women by simply making them feel seen while simultaneously educating her audience who may not be privy to the realities she faces within her experience. In December of 2021 Ms.Boogie was featured in print for Vogue Mexico as well as being listed as a Emerging Talent in Peoples Magazine.

viento izquierdo ugaz is a multidisciplinary artist, cultural organizer, art director & language justice worker based between Lima & New York. Through poetry, photography, thread and moving image they consider the effect of migration on the visual language of their lineage, and how this lexicon permeates their queer & trans chosen family archive.

They are founder of Peru-based, Cabritas Resistiendo, a mutable platform which creates spaces for trans folks to resist together through learning and joy virtually and IRL. They are also co-organizer of BODYHACK, a NY/global mutual aid happy hour for trans & non-binary people, and co-founder of rogueTHEIF, an upcycled denim brand/performative gesture seeking to poke holes in capitalist modes of exchange.

viento is a consultant with Transgender Equity Consulting and a current Leslie Lohman Museum and EMERGENYC Fellow whose work has appeared in El Museo del Barrio, A.I.R, The Poetry Project, Brooklyn Academy of Music, & Lambda Literary; their first chapbook is Estoy Tristeza (No Dear, 2018).